I wanted to post this for sometime, but my electronic problems have hinder me. Betty Webb has 2 series the Gunn Zoo series. There are four books now and May 2 THE DEATH AN OTTER will be published.

The Lena Jones series has nine books and feature Lena Jones who was tossed out of a moving car in Arizona as a child and grew up in the state foster system. She is now a private investigator. Her cases usually deal with woman issues.

I have read both series and highly recommend them. There are reviews on some of them on Goodreads and this blog.

“Intrigued by the commotion underneath the banana palm, Lucy curled her four-inch claws under her leathery pads and moved forward on her knuckles to investigate. It wasn’t time for the human-thing with the soft voice to arrive with the morning meal, so what could the noise be? Ah, there was the cause of the trouble. A strange human-thing had fallen into Lucy’s enclosure and now thrashed among the weeds as if it belonged. What nerve!”

The first book in the Gunn Zoo series an entertaining a fun read full of animal stories.The inside workings of a Zoo are discussed.The characters are developed and the areas descriptions will place you at a Zoo and on a houseboat long California central coast.

Theodora Bentley aka Teddy found a body in pregnant Lucy enclosure and it appeared Lucy was responsible for his death. This exhibit is a most popular of the zoo exhibits. Teddy is worried about her friend being shipped out to another zoo. We learned about other displays as monkeys and wolves. There are several subplots that added to the story. The family history as her father has emblazoned money from his firm and the FBI is looking for him. Her Mother wants Teddy to married a rich society man and dislikes her relationship with the Sheriff Joe Rejas. Her Mother does not like Teddy living in a houseboat from her Father. All the twists and turns take will keep you turning the pages until the end. I HIGHLY RECOMMEND this book and series. In fact, I HIGHLY RECOMMEND Betty Webb’s Lena Jones series. 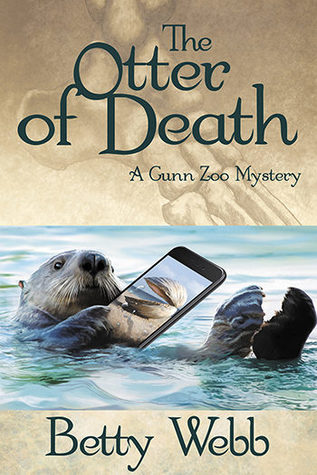 https://idahobluebird50.wordpress.com Member of NetGalley and Edelweiss Senior Citizen and been reading and sharing my thoughts on books most of my life. I read for my pleasure. I have been married for over 65 years. We had a Bengal Cat, Kato who has crossed over the Rainbow Bridge. Interests include reading, dogs, cats, gardening, knitting, crocheting. I have a strong interest in North American native plants. A word on my reviews. I am writing very. Books review are from my public library, brought, many from Netgalley, a few from Edelweiss, occasionally from an author or from friends. The opinions are my own. I represent no publisher, author or any other source​. My reviews can be found on. Tumblr, Goodreads, Google+, and Twitter. I have no Facebook account. Thanks for reading my blog.
View all posts by bettylouise31 →
This entry was posted in #NetGalley, First Lines, First Lines Friday, Uncategorized and tagged Animals, anteater, Betty Webb, cozy mystery, Favorite, Lucy, Theodora Bentley, Zunn Zoo. Bookmark the permalink.

This site uses Akismet to reduce spam. Learn how your comment data is processed.

Travelling is my joy of living. Sit back relax and come with me.

Videos of feral cats on the streets, and my own four feral felines at home, feline humor, advice, and gifts for your cat.

Philosophy is all about being curious, asking basic questions. And it can be fun!

An onion has many layers. So have I!

Travelling is my joy of living. Sit back relax and come with me.