FIXIN’ TO DIE By Tonya Kappes 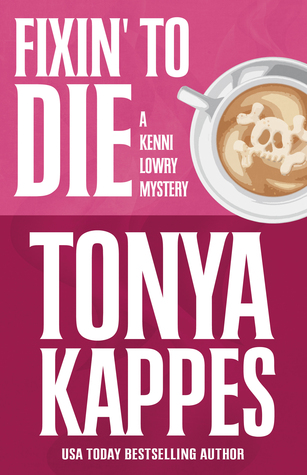 Cottonwood, Kentucky is down to one officer, the sheriff, Kenni Lowery. She has served the town for two crimeless years. The Dispatcher sends her a message on a walkie-talker.about the murder of the town popular Doctor. Kenni hears a strange voice is not sure it is coming from as no one is around.. This book is character driven and will hold your attention during all the twists and turns it takes. I will definitely read the next book

Disclosure: I received a free copy from HENERY PRESS through NetGalley for an honest review. I would like to thank them for this opportunity to read and review the book. The opinions expressed are my own

FOUR FUNERALS AND MAYBE A WEDDING by Rhys Bowen

In the 12th book of Her Royal Spyness series, Lady Georgiana Rannoch is in London to plan her wedding. With all the problems with her plans, she is sorry they didn’t manage to elope. She is still waiting for her degree allowing her to marry Darcy than Queen Mary invites herself to the wedding and suggested that the princess be bridesmaids, the church Darcy wants to be married and Georgiana must be approved by the Catholic church. Her Mother has joined her as her German boyfriend’s Father has passed away and her future is not clear. Where she and Darcy will live is not clear. Georgiana received a letter from her Godfather informing her to move into Endsleigh and make it her home. She makes the move and all is not right there. The twists and turns the book takes on have you turning the pages. More deaths occur before Georgiana and her Mother understand what was issuing at Endsleigh. Does the wedding take place? I HIGHLY RECOMMEND the book and series. Disclosure:

Many thanks to Berkeley for a review copy. The opinions expressed are my own

#CITY OF SCOUNDRELS by Victoria Thompson

I have learn of things that happened during the World War that I didn’t know to my knowledge we didn’t have The American Protective League in WW TWO. It seems those of German descent were treated similar to the Japanese during the second war. The flu of 1918 was a world problem as it spread every where and many dropped dead where ever they were.. Gideon has it and Elizabeth and his Mother work together to pull him through it. This is the 3rd installment of the Counterfeit Lady series. Gideon Bates awaiting his call up is writing wills for the soldiers before they are shipped overseas. He writes a will for Tom, a partial owner of a shoe factory. Tom’s brother and stepmother do not approve of his wife. When Tom is reported dead, his brother steals the original will leaving the only will left that leaves every thing to his brother. He removed all the money from Tom’s bank, this leaves the widow and unborn child penniless. The World War I is about over, but an another draft is possible, age limit has been raised and Gideon Bates is awaiting is his call up. Elizabeth’s family decides to do a con that will recover the stolen money. The twist and turns the con takes will your amuse and hold your attention. The ending is a surprise. I HIGHLY RECOMMEND THIS BOOK AND SERIES.

Disclosure: Thanks to Berkeley for a copy through NetGalley. The opinions expressed are my own.

This linked to for Lisa Coleman OPEN OUR EYES

KAPPY KING AND THE PICKLE KAPER by Any Lillard

Need a funny and relaxing read, try the 2nd Amish mystery about pickles. Nappy and Edie are on their way to pick up her brother. The drive is stalled by a yellow buggy overturn with white pickles scatter about the area. Pickles are everywhere as the driver was on his way to deliver an order of pickles. The driver Sally June Esh is killed in what like and hit and run accident. But wait could it be murder? If so, who was the intended victim? Edie received a text message saying it was deliberate as he saw a black car drive directly for the buggy. Nappy and Edie decide to explore the matter instead of turning the phone over to the police. There are romances beginning for both girls. Nappy is slowly beginning to leave her home. Edie is staying for her brother Jimmy who loves animals and now wants a goat and pig along with the dogs and gerbils. There is a slight twist at the end. I recommend this book and series.

Many thanks to Kensington Press for a review copy. The opinions expressed are my own.

The seventh book in the Needlepoint series is very creative and original for a cozy mystery. I have been reading for 75 years and almost exclusive mysteries since 2013. I have never seen the way the main adventures used in the way. It was a pleasure to read how the protagonist didn’t do anything stupid but still managed to solve the crime. Angie Curtis goes to her first auction with her friend Sarah to learn about auctions. Angie sees an old faded needlepoint of a coat of arms and buys it. At home, she removes the back and a receipt for a child from a foundling nursery in the 1700’s and a pink ribbon to identify the child. A chance meeting with a friend who is a TV reporter for a Boston TV station, a one-minute human interest report is made. Shortly, after it airs the station received a message that all who investigate would day. The next Cl Walker is shot in her car. Angie and her friends work to make sure Angie is not hurt. There is an explosion that injured her stepfather and there other strange events. The motive is strange and surprised me. I HIGHLY RECOMMEND THIS BOOK AND SERIES. One pasta recipe is included.

Disclosure: Many thanks to Kensington Books for a review copy. The opinions expressed are my own.

#THREAD ON ARRIVAL By Lea Wait

The Haven Harbor Community has turned out in mass for the Blessing of the fleet. It is an annual event where the names of those lost at sea are read and the fleet receives a blessing asking for a safe and productive year. Angie attends and Patrick accompanied her in the eighth book in the Mainly Needlepoint series. There they see Ike Hamilton and friend, Leo. Ike is disabled and collects empty bottles to add income. Leo is new to the area and very young, he has been helping Ike to collect bottles. Angie is picking up needlepoint and is present at Dave’s when a bloody Leo seems help from Dave. Ike has been stabbed to death. Is Leo guilty? Angie and Dave feel he is not guilty and set out to aid him. Who is Leo? Why is he homeless?

I HIGHLY RECOMMEND THIS BOOK AND SERIES. Recipes are included. Disclosure: Thanks to Kensington Books for a copy through NetGalley. The opinions expressed are my own.

This historical novel will take you back to the late 1930s and the hill people of Kentucky as I learned about the blue people that lived in the area. Cussy Mary Carter believed to the last one alive. They were considered people of color. She is 19 and has WPA job carrying books and other information to the hill people. You feel for each one as they struggle to live. There is jealous, racial injustice and very little food. Making malnutrition a main cause of death. Cussy Mary’s father work in the coal mines of Kentucky. Roosevelt’s Kentucky Pack Horse Library Project is explained in full showing the value of books. I HIGHLY RECOMMEND THIS BOOK. Disclosure: Thanks to Sourcebooks/Landmark for a copy through NetGalley. The opinions expressed are my own.

Videos of feral cats on the streets, and my own four feral felines at home, feline humor, advice, and gifts for your cat.

Philosophy is all about being curious, asking basic questions. And it can be fun!

An onion has many layers. So have I!

Chronicles of an Anglo Swiss

Welcome to the Anglo Swiss World

Teaching the art of composition for photography.

My personal blog navigating eating disorder recovery from a Health At Every Size perspective, spirituality, and other great stuff.